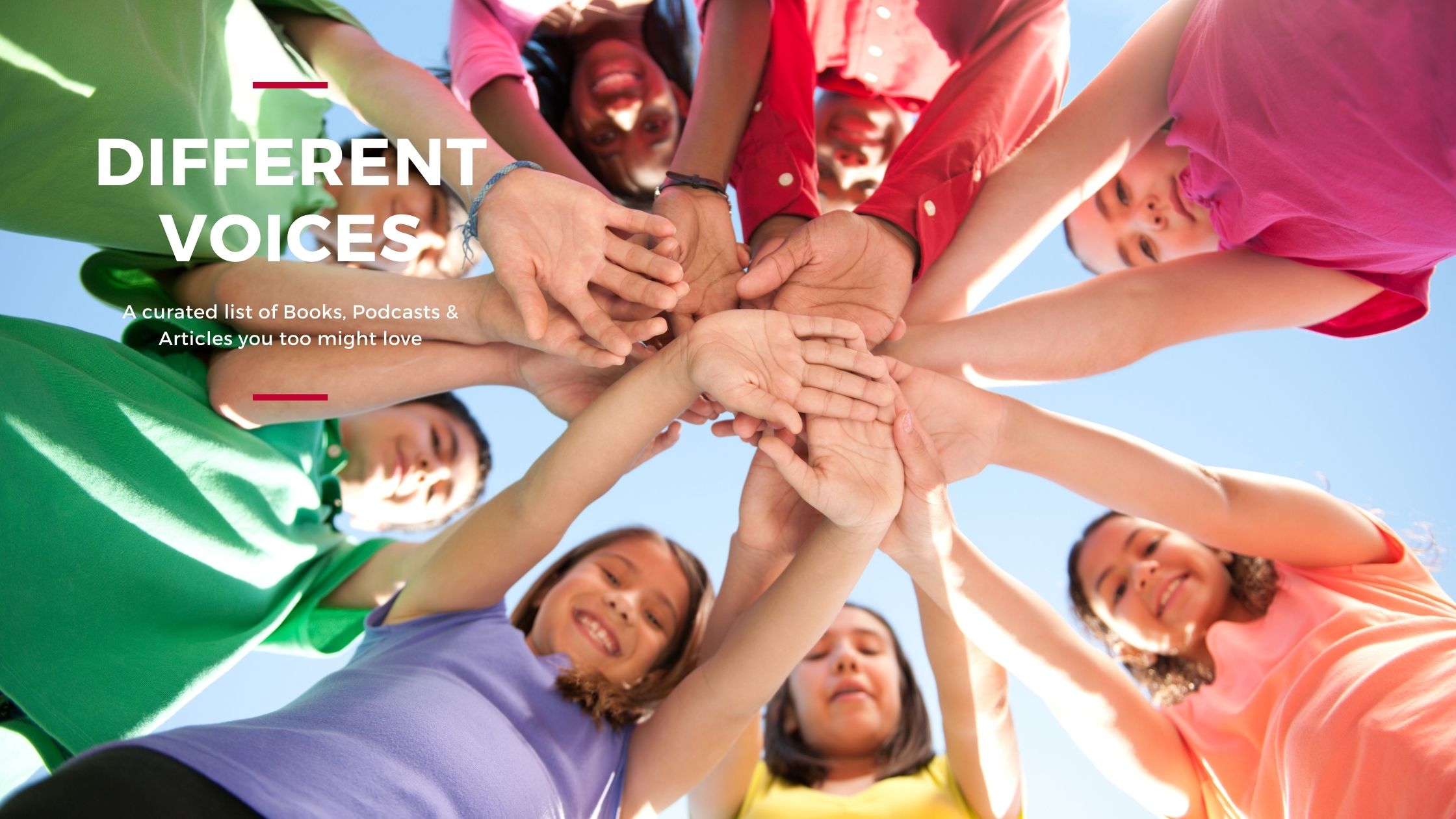 One of the consequences of a year of working from home is that our circle of influence has shrunk considerably. Where in the ‘before times’, we used to come into contact with lots of other people during the course of our day (people on the subway, the barista at Starbucks, other people in the elevator on the way to the office, the janitor in the hallway, the person serving your food at the cafeteria, several colleagues in the hall, your boss in the kitchen in front of the coffee machine), we are just not having these micro-interactions these days.

As a result, our sphere of influence is much smaller and often much less diverse. And one of the consequences of that is that we are not exposed to or confronted with as many different perspectives as we were previously.  So I have really tried to expose myself to different voices in the virtual world. This week’s newsletter is a few of those resources that I found the most interesting and impactful, with articles, podcasts and TED talks giving a different outlook on issues that we might have discussed within our sphere of influence in the past, but aren’t able to currently.

THE VOICE OF DIVERSITY

“People are not widgets. Identities are not commodities. Inclusion is not a line item in your financial report. .. You want to know why diversity and equity leaders have such high turnover rates? Because companies spend so much time on strategy and so little time on the hard work of change.”

Powerful words! And change that is really needed. Michelle Silverthorn has written a very direct, practical, and insightful book into the impact and power of Authentic Diversity: How to Change the Workplace for Good.

While Diversity & Inclusion may at times feel like the ‘flavour of the month’, there truly is a massive benefit to all of us in embracing it.  According to the American Sociological Association, “companies with the highest levels of racial or gender diversity brought in nearly 15 times more sales revenue than those with the lowest.” D&I is truly good for ALL of us!!

THE VOICE OF GENERATION Z

This TED talk on the economic impact of unpaid internships is really eye-opening. Sure, I knew that unpaid internships were a thing, but I am a bit embarrassed to admit I’d never thought about the actual implications. Or the privilege inherent in the system. David Leo Hyde gives a really engaging and interesting talk on why everyone deserves to be paid for their work, and how doing so in fact benefits everyone.

THE VOICE OF YOUR INNER CRITIC

I am a huge fan of Dr. Susan David, and think her book on Emotional Agility is one of the best and most impactful books I’ve read in years. Her TED talk on the Gift and Power of Emotional Courage is brilliant, too, if you don’t have time to read the whole book. 🙂

Dr. David recently wrote an article on Imposter Syndrome – that feeling that so many ambitious and highly intelligent people are burdened with, that they are just faking their success, that their success is due only to luck, and that at any moment they will be ‘found out’ for the ‘imposter’ they are. This is definitely *not* a voice you want to be listening to! David’s article is full of helpful advice, and practical suggestions, especially for how to deal with the Imposter Syndrome that might be affecting you due to the current global circumstances.

THE VOICE OF NON-NATIVE SPEAKERS

Having lived more than half my life abroad, and the majority of my life in countries where English was not the native language, I could really relate to NPR’s Rough Translation podcast! I’ve spent over two decades working with people on how to communicate well in English and thus found the episode on How to speak bad English to be really brilliant. Communication truly is a two-way street and it is inherent upon all parties to learn how to communicate better, not only the non-native English speakers. This was a great listen for someone who has perhaps not considered how challenging it can be to communicate in a foreign language, and how much privilege we native-speakers have.

THE VOICE OF GENDER

As a cis-gender female, the voice of gender has for me mostly been about working towards equality for the sexes. There is of course another voice in the gender field and that is the voice of non-binary, transgender and gender-fluid individuals. I enjoyed this TED Talk on the language around gender. Language is itself fluid and in a constant state of flux. As I often joke, Shakespeare apparently coined 1600 new words and phrases, so surely we are entitled to one or two? And as the language evolves, it is evolving to incorporate more diversity.

THE VOICE OF A STORY-TELLER

And if you’re just looking for a great story, Kate Quinn’s The Rose Code is the answer! Several friends recommended it, all mentioning that they had stayed up until the wee hours to finish it as it was so compelling. I was no exception! The story is about the British cryptanalysts at Bletchley Park during World War II who broke the German Enigma code. Based on fact and true stories of cryptanalysts that worked there, the novel is brilliantly written.

There was a bit of foreshadowing [where exactly is the point at which foreshadowing tips over into formulaic??], but I had no idea what the Rose Code would reveal, nor who the traitor in the group was until the very end.

Quinn’s other novels, The Alice Network, and The Huntress, also deal with spies in other parts of Europe during WWII and they are also fabulous. I was a bit sceptical that Quinn’s latest book could hold up to the others, fearing this new novel might be repetitive, but it was fresh, interesting, and historically rich. Definitely recommend!

Hope you have a wonderful weekend, and Happy Mother’s Day to all the mums out there! What a year it has been!

P.S.    You may have noticed that I rarely link to books on Amazon. The rationale behind that is that in general, but especially during this pandemic, I try to support small businesses and prefer to shop at a local bookstore. Thus as few Amazon links as possible. 🙂