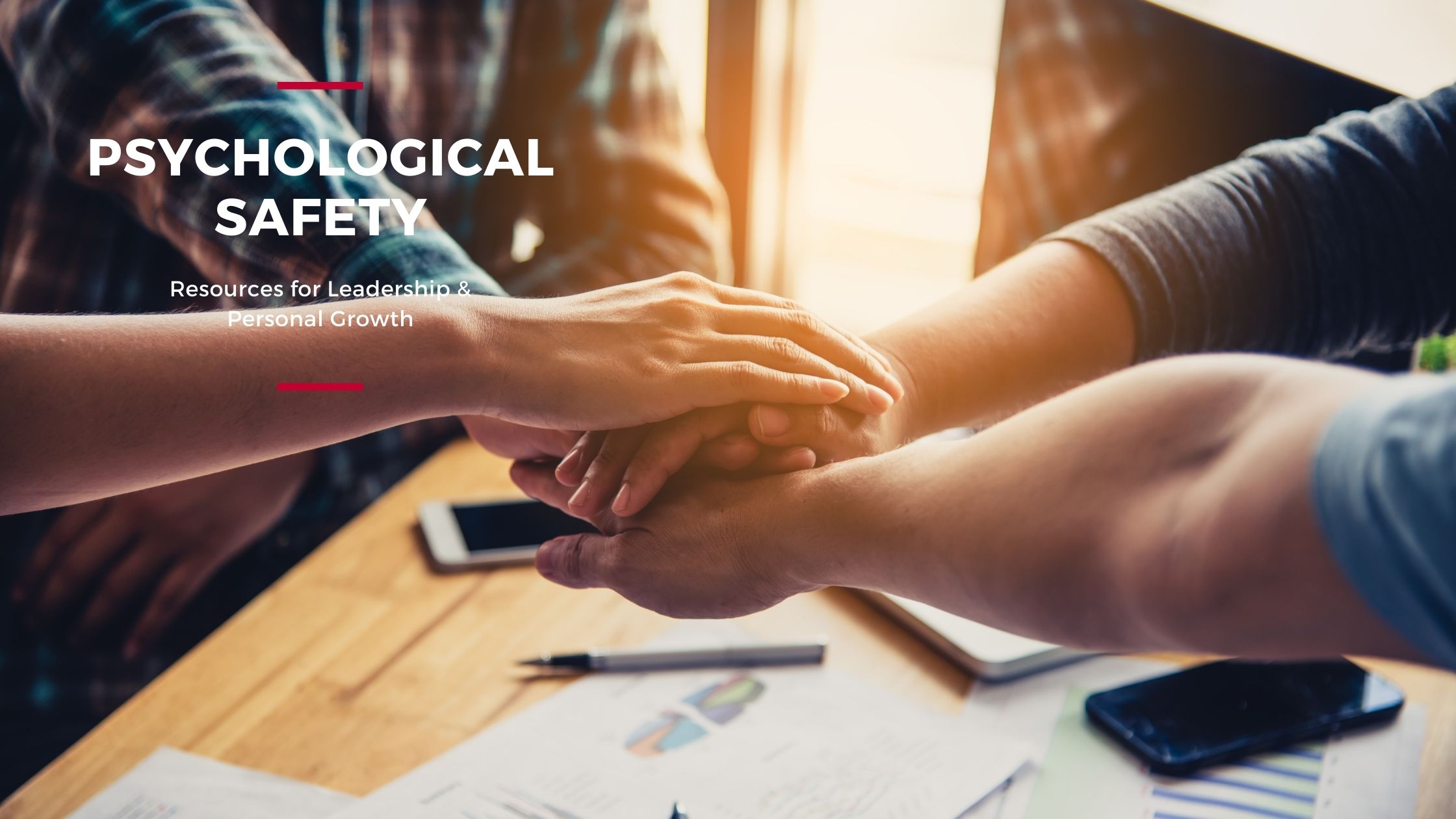 Have you ever wondered where buzzwords come from?? I certainly have. One minute you’ve never heard a term, and the next, it is *everywhere*. Do people get together and agree on a schedule for releasing new terminology? 😄  How does this happen?

About a year ago, I came across the term “psychological safety” for the first time. Honestly, the Buzzword Committee could have chosen a better term – psychological safety doesn’t really speak to me. What does it even mean? But the more it’s popped up over the past months, the more I’ve realized how important the concept actually is. The term may be vague, but the belief behind it is extremely valuable!

So for those who might be in the same boat as I was (aka a bit in the dark about what it all means!), I found this quote from Dr. Amy Edmondson of the Harvard Business School to be really illuminating:

“Psychological Safety is a belief that one will not be punished or humiliated for speaking up with ideas, questions, concerns, or mistakes, and that the team is safe for interpersonal risk-taking.”

Particularly in this time of significant change in the working environment, creating an environment of trust is crucial to our ability not only to perform at our best, but to our ability to be vulnerable and authentic.

Pretty much everything Simon Sinek says is brilliant, and his TED Talk on Why Good Leaders Make You Feel Safe spells out exactly why we need psychological safety at work. Firstly, he points out that as social animals, “we lived together and worked together in what I call a circle of safety, inside the tribe, where we felt like we belonged. And when we felt safe amongst our own, the natural reaction was trust and cooperation.”

But of course “the problem with concepts of trust and cooperation is that they are feelings, they are not instructions. I can’t simply say to you, “Trust me,” and you will. I can’t simply instruct two people to cooperate, and they will. It’s not how it works. It’s a feeling.” And it can be difficult to translate a feeling into an identifiable, tangible, quantifiable behaviour.

Identifying who is in your tribe is also a key component to your psychological safety. We evolved to be part of a larger social group of around 150 people. In the modern era, our social network can be 10x, 50x, 100x that. And we are not built to accommodate that many opinions or that much input. So a very important part of our psychological safety is in our own hands: choosing whose opinions matter to you, and who you will allow to actively – and passively! – influence and impact you.

The concept of trust is built into our DNA. Distrust is actually a learned response. Which means that creating and ensuring psychological safety is actually closer to our default than the opposite. Good news!

Malcolm Gladwell’s book Talking to Strangers is a brilliant look into our psyche around the topic of trust, and discusses fascinating examples of learned distrust (a form of unconscious bias). The audiobook is brilliant, as the interviews Gladwell did are part of the audiobook and although he as the author narrates, there are many others adding their own voices and personal stories.

Did you know that in the UK, they are about to have legislation come in that means that employers are actually going to be held responsible for the psychological and emotional safety at work of their employees? I’m not sure how that will be implemented, nor how it can be tracked, but I do think it’s a sign that emotional safety is a topic that has gained enormous (and deserved!) traction. Mental health gets a lot of press, but not necessarily a lot of genuine application in the working world.

According to neuroscientist Evan Gordon, the ‘fundamental organizing principle of the brain’ is “the risk and reward response. Five times a second, at an unconscious level, your brain is scanning the environment around you and asking itself: Is it safe here? Or is it dangerous?” (The Coaching Habit, by Michael Bungay Stanier).

Five times a second!!! We really aren’t built for uncertainty, or for longer-term danger. From an evolutionary perspective, we are made for “will that tiger eat me?” moments: they happen quickly, or they don’t. And that is what makes it imperative that we create a safe environment – the stress caused by uncertainty can be long-term and debilitating.

So how do we create psychological safety?? I’m all for practical applications of behaviours!

Dr. Edmondson (mentioned above) has some really helpful mini scripts for creating an environment of psychological safety at work on her LinkedIn profile. Well worth a look!

I also loved this visual and article on 6 questions to help increase the psychological safety of your team.

And in a hybrid working environment, where we are often sharing a psychological environment but not a physical one, there are also some key steps to take, as advised here by the Harvard Business Review.

I’m quite deep into a heavy text on neuroplasticity and coaching at the moment so to balance that out I’ve been reading a series by a Toronto-based author, Robert Rotenberg. The books are set in Toronto, and there is a lot of reference to Toronto landmarks, cafés, residential neighbourhoods etc. which I love. It’s a small trip down hometown memory lane for me, and the stories are quite good as well! I’m currently reading The Guilty Plea and enjoying the story as well as all the Toronto nostalgia.

WHAT I’M LISTENING TO

One of the topics I am absolutely passionate about is having a voice. As a woman, and as an immigrant, this can often be an issue. While I truly love living in Germany, I am not a German citizen and that means I cannot vote. [Germany up to now has not allowed dual citizenship – with the new government, this may change, something I am very excited about!!] As a parent, I would like to have a voice to influence the lives of my children, particularly when it comes to education, but that is a conversation to be had when we’ve got a bit more time, and perhaps a glass of wine! 😉

The theme of having a voice is a strong thread through psychological safety, and part of having a voice is making sure that you are well-informed. My friend, Leigh McGowan (who I’ve known since childhood) has been doing a brilliant series on American politics on Instagram and recently was featured on MSNBC! She has started her own podcast – The Politics Girl Podcast – and if you are interested at all in American politics, or even just enjoy a well-researched and dynamic podcast, this is a great listen!

A huge thank you to everyone who responded with such enthusiasm to my Get Clear on Your Year coaching offer!! As of writing this, 8 of the 10 slots have been booked. If you want to join them, you can also get in touch via my contact page! It is so wonderful to see so much hope for 2022 and it’s exciting to have the opportunity to help make next year a fantastic one!!

Wishing you a wonderful start to December!

PrevPreviousHow to Lead in a Post-Pandemic World, Part 2
NextWomen in the WorkforceNext