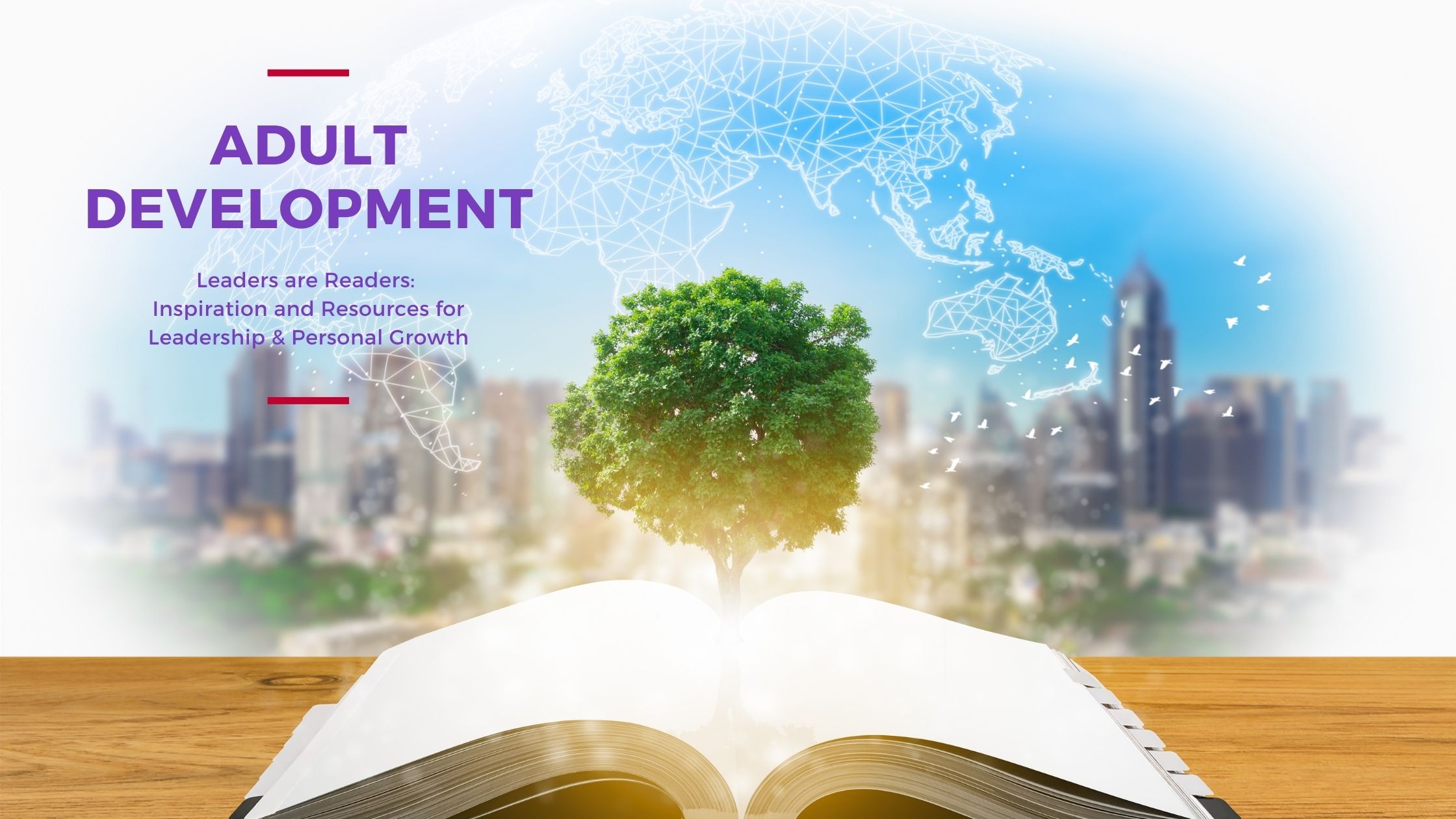 When I was in Sweden the other week, one of the topics during the workshop was Adult Development. It’s one of my absolute favourite topics to discuss and coach on, and as I was joyfully digging into it with my group, I realized I had never written a newsletter on the topic! It underpins everything about leadership, authenticity, development, and growth. And it is completely fascinating on so many levels. So we’re going cerebral this week! 😀

As we all know – especially from the past three years – science is constantly evolving. Through the lens of what we know today, it’s often really baffling what science believed in the past. I’m sure that will be true for some of the beliefs we hold today as well!

Astonishingly (to my mind at least!), for a very long time, scientists and behavioural psychologists believed that once you were an adult, you were finished developing. You went through the developmental stages of childhood and adolescence, but once your brain was fully developed at around age 25-27, it was done. It wasn’t possible to develop further.

I have no idea how scientists came to this conclusion. I’ve certainly experienced a multitude of adults who have developed, changed, grown, and learned new skills long past the age of 27! But this was the reigning theory of the time:

However, there is one massive difference between the development of childhood and of adulthood. CHOICE. Each child and adolescent proceeds through the developmental stages at roughly the same age, and in the same order, as every other. Babies learn to crawl before they learn to walk, for example. And they don’t choose whether or not to progress to the next phase. Babies don’t contemplate whether they should learn to walk or not. They don’t evaluate the pros and cons and decide against it. It happens instinctively and automatically.

Adult development, on the other hand, is a choice. We have progressed through the stages of childhood (Stage 1) and adolescence (Stage 2) to become adults (Stage 3). But moving on from there – transforming your own personal graph so it does not look like the flatline graph above! – takes active choice.

In essence, the Socialized Mind is becoming an adult as our society – our family, our education, our community, our culture – has taught us. And that’s a good thing! This is how we as humans survive in our tribe.

Leadership requires taking a step further into the Self-Authoring Mind. Stage 4 is where the vast majority of the most effective leaders live. (See Mastering Leadership for more info). Stage 4 is about choosing your own path, and writing your own story. Determining your own identity, your own values, and your own narrative.

MOVING INTO THE SELF-AUTHORING MIND…

So much of my leadership coaching is on this very topic. You can see why I get excited by this stuff, right? 😀 I even did a recent Thursday Thought on the topic. What is fascinating is how few people actually do choose to expand their capabilities and move up the graph into the Self-Authoring Mind. Less than 35% of adults move into Stage 4. Which isn’t a lot!

This article on How to Be an Adult goes into further detail about the Socialized and Self-Authoring Minds:

Becoming an ‘adult’ means transitioning to higher stages of development. It means developing an independent sense of self and gaining the traits associated with wisdom and social maturity. It means becoming more self-aware and in control of our behavior, as well as increasingly aware of, and better able to manage our relationships and the social factors affecting us.

However, most of us — about 65% of the general population — never become high functioning ‘adults’, i.e. we never make it past Stage 3 (out of 5 Stages!). We still lack an independent sense of self because so much of what we think, believe, and feel is dependent on how we think others experience us.

What having a Self-Authoring Mind means is that “people align with an internal sense of direction and inner seat of judgment. These people are able to step back enough to question expectations and values, take stands, set limits, and solve problems with independent frames of mind.” That definitely sounds like the kind of person – and leader – that I want to be!

Did you know there is a Library of Concepts?!?! Does that not sound like the coolest, most interesting place?!?! I don’t think it’s a physical location, but I would love to spend a significant amount of time there! I found a very helpful article describing the three main stages of Adult Development there, and it’s also very much worth a read.

If ever there were an example of moving from the Socialized Mind to the Self-Authoring, it is John McAvoy. He grew up in London in a criminal family, and followed his step-father’s footsteps into armed robbery, eventually being caught and sent to prison. While in prison, however, he had a few epiphanies and realized that he wanted to change his life. So he did! He self-authored himself into becoming a world-class athlete, and while still incarcerated set a world record for rowing! He managed to get released from prison and is now a professional triathlete and motivational speaker.

I’ll be honest and tell you that when I saw the length of this podcast, I almost gave it a miss. It clocks in at 2h44m, but it is absolutely worth the listen!! The combination of Dr. Chatterjee (one of my favourite podcast hosts – he of the mellifluous voice 😉) and a reformed prisoner turned triathlete did pique my interest!

There were some really powerful moments during the podcast that I thought I would share with you, in case you don’t have the time to listen to the entire thing. Impactful, insightful observations that lead to the self-authoring mind:

“When I was growing up as a kid […] I attributed success to money and wealth. That is what I thought in life that defined you as a human. I thought the more money you had in your bank, the bigger your house was, the more watches you had, the bigger the car you had, that that defines you and what value you have as a person. When I broke that [sporting] record that day, everything I’d ever craved as a little boy, I felt that moment on that gym mat in that gym. And the satisfaction to work towards something and not being average and achieving something with my life and a legacy…for that moment, I was one of the best people in the country at what I had just done, and in the world. And it made me feel incredible. And that’s when I made a decision that I was going to use sport and my body to be a vehicle to get me out of that life.”
– John McAvoy

“What we’re surrounded by, it very much limits or defines what we think is possible.”
– Dr. Rangan Chatterjee

“I realized, in my life, you’re constantly developing and growing, and that legacy is actually, it isn’t about money and it isn’t about winning stuff, it’s about you having a positive impact on other people’s lives, and lifting other people up.”
– John McAvoy

It really is worth listening to the entire podcast! It’s a worthwhile investment of time to experience this transition from socialized to self-authoring mind!!

I have So. Many. Books on my nightstand just waiting to be read!! My TBR pile never seems to get any smaller! 😂 There is actually some semblance of order in which I plan to read them, but as soon as I saw that Kate Quinn had released a new novel, that shot to the top of the pile! The Alice Network was one of my favourite reads a few years ago, and every book of Quinn’s I’ve read since has been engaging, interesting, and worth reading.

The Diamond Eye delivered too. It was a fascinating – true! – story of a female Russian sniper in WWII. It fits quite well with our theme of Adult Development, as Mila (the protagonist) has to temporarily give up her dream of being a librarian to become a sharp shooter in the Russian army. Not only does she learn an entirely new set of physical skills, but she needs to learn how to be a female leader in a male-dominated world. And is then sent on a tour of the United States to drum up support for the Allies, and befriends Eleanor Roosevelt!

Although it is a fictionalized account, the vast majority of the story is actually true. Mila’s capacity to learn, to motivate herself and others, and to grow into new roles is a true testament to the power of adult development! Such a great read!

I would love to know if this topic grabbed your interest as much as it grabs mine! I find it absolutely fascinating. I even gave a keynote speech recently to 70 leaders of a Canadian banking institution on this very topic! It frames a lot of my leadership coaching work now – how to move into a Self-Authoring Mind, what that looks like for you specifically, and what it takes to discover and be true to what your own story and path are.

And I would really love to know what resources have helped you to move into the Self-Authoring Mind. It’s a fascinating journey and I am always keen to learn more!

Have a beautiful weekend!